VetSalute is a movement started by veteran and astronaut Buzz Aldrin to make people aware of the legislation signed into law in 2008 allowing military veterans to salute the flag during the National Anthem. 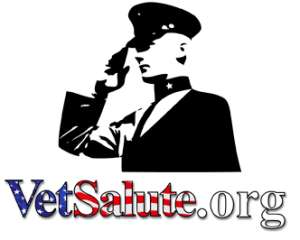 “With the President’s signature, we have finally revised the law to give veterans the proper distinction of saluting during the National Anthem… Those who are currently serving or have served in the military have earned this right, and their recognition will be an inspiration to others. The salute is a form of honor and respect, representing pride in one’s military service. Veterans and service members continue representing the military services even when not in uniform. The U.S. Code is now consistent for veterans and all service members in regards to the symbolic gesture of the military salute.

“I believe this is an appropriate way to honor and recognize the 25 million veterans in the United States who have served in the military and remain as role models to other citizens. Those who are currently serving or have served in the military have earned this right, and their recognition will be an inspiration to others.”
– Sen. Jim Inhofe, sponsor of salute the flag legislation

Dr. and Col. Buzz Aldrin (USAF ret.) is an American and world historical icon as one of the first two men to have walked on the moon during the Apollo 11 landing. He also is a Korean War Veteran so to call him patriotic is an understatement. He’s proud to talk about his patriotism wherever he goes and more importantly, show it. One of those ways is to salute the flag during the national anthem at any event he attends. Unfortunately, most veterans don’t know that this is allowed. It’s Buzz’s mission to make people aware of this law and this is why he has started the VetSalute movement.During this crucial time in our nation’s history Buzz would like veterans to be honored and recognized for their contribution to our country.


HOW YOU CAN GET INVOLVED

Won’t you join us in this movement? We’d also like to get as many veterans organizations to partner with us on getting the word out. One way we are planning to spread the word is to get announcers at sporting events like Major League Baseball games and other major public gatherings to use VetSalute to recognize our troops and veterans. Other ways would be to announce it at other public gatherings big or small. We suggest the wording below to be used before the national anthem is played:

Back in 2008 the President signed legislation allowing veterans and military personnel out of uniform to hand salute the flag during the National Anthem as a form of honor and respect, representing pride in one’s military service. We would like to make people aware of this act and so Buzz Aldrin has started a movement called VetSalute. If you are a military veteran or a serviceman out of uniform, please join Buzz Aldrin, if you choose to, in saluting our flag during the national anthem – whether you are in the audience, watching on TV or listening on the radio. Hand salute the flag with Buzz to show your pride and be recognized and honored for your service to our country.